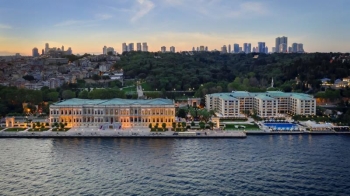 Guests arrive at Turkey. A representative of Turkey Tours Company will welcome our guests at the Istanbul Airport, then assist with checking in to a hotel in Istanbul. After the check-in process at the hotel, our guests will have time to rest.

Beginning in Istanbul we’ve included a local guide to take you through the fascinating history of the old city as you explore the historical sites such as the imposing Hagia Sophia, the enchanting Basilica Cistern, the stunning Blue Mosque, and the beautiful Topkapi Palace.

Istanbul is of course also a heaven for shopping, with over 5,000 stalls in the Grand Bazaar alone. Navigate the colorful lanes with your expert guide who’ll introduce you to some unique artisans and showcase local handicrafts and traditional weavers.

From your hotel in Istanbul you will be privately transferred to Istanbul airport, around a 1-hour drive, from where you’ll board a short 1-hour, 30-minute business class domestic flight to Izmir. From Izmir, the transfer to your hotel takes just under 1 hour.

The ancient city of Ephesus, located near the Aegean Sea, is the best-preserved classical city in the Eastern Mediterranean. At its peak, it was the largest Greco-Roman city in Asia Minor with a population of 250,000.

The temple of Artemis in the city of Ephesus is one of the Seven wonders of the Ancient World and was a Greek temple dedicated to the goddess Artemis. A guided visit around this ancient Greek city will take you back in time to discover the stories and legends surrounding the structures that still stand to this day.

The House of Virgin Mary is a popular location for Catholic pilgrims and stands beautifully nestled amongst the pine-clad hill. Many visitors make the pilgrimage here as they believe this to be the house where Mary, mother of Jesus, was taken to by Saint John to spend her final years.

Your second day in Ephesus will take you to Pamukkale, you will be privately transferred to Afrodisias, a city dedicated to the Greek goddess of love, which is approximately two-and-a-half hours by car.

The stunning temple here is now a UNESCO World Heritage Site and shows remains of quintessential Greek architecture with striking marble sculptures and facades. From Aphrodisias, the onward drive to Pammukale takes around one-and-a-half hours.

Pamukkale is best known for its gleaming white calcite shelves, or terraces, overrunning with warm,mineral-rich waters. The highly photogenic and brilliant white terraces, with their naturally heated pools, are an otherworldly natural wonder. Nearby you’ll visit Hierapolis, whose name translates as ‘sacred city’, which is an archaeological site blending Roman, Jewish, pagan and early Christian influences.

Mentioned in the Bible, it has been used as a spa since 2nd century BC. The highlight is the Roman amphitheatre, with no less than of 12,000 seats, and the spectacular views of the white terraces of Pamukkale.

From your hotel in Izmir a private transfer will take you on the 45-minute drive Izmir Adnan Menderes Airport from where you’ll take a short business class domestic flight, just over one hour, to Kayseri.

Cappadocia attracts visitors due toits enchanting landscape of striking rock formations, caves and chimney stacks caused by years of flooding and winds. Modern villages are interlaced with colonies where local people still reside in the caves carved into the rock. Horses play a large role in life here and in fact the name Cappadocia translates from Hittite as “land of the beautiful horses”.

During your two-night stay in this breath-taking region visit Pasabagi, known as the “Valley of the Monks” as well as the Valley of Zelve, otherwise known as “Imagination Valley”. Uchisar castle is a fascinating place to explore and stands at the highest point in Cappadocia, offering fantastic views.
The castle features a labyrinth of rooms carved into the rock face over multiple layers.

Of course, the best way to experience the wonderous sights of Cappadocia, and an image which adorns many pictures of the area, is taking a deluxe hot air balloon ride over the stunning landscape. Rising early, marvel at the rock formations and they change color as the sun slowly creeps up over the horizon.

From your hotel in Cappadocia a private transfer will take you on the 45-minute drive Kayseri Airport from where you’ll take a short business class domestic flight, just over one hour, to Istanbul.

Istanbul is one of the most ancient cities in the world, and the only city on the planet to be situated on two continents. One of the best ways to explore Istanbul is by taking a private yatch on the grand Bosphorous River, which runs through the length of the city..

For something extra special, why not ask your travel consultant to include a helicopter tour of Istanbul which will offer you a birds-eye view of the Golden Horn, the Historical Peninsula and the Bosphorus?

From your hotel in Istanbul you will be privately transferred to Istanbul airport then end of services.